Winners and Another Happy Thing

First, I love that everyone who entered told me how they found my blog. Thank you!

Second, while everyone entered the drawing for ISLA AND THE HAPPILY EVER AFTER, Krista Van Dolzer was the only person who wanted the magazine, and Mariah Ellis was the one one interested in a critique. So they automatically won those giveaways.

Determining the third winner took a bit more work on my part, but we have one. 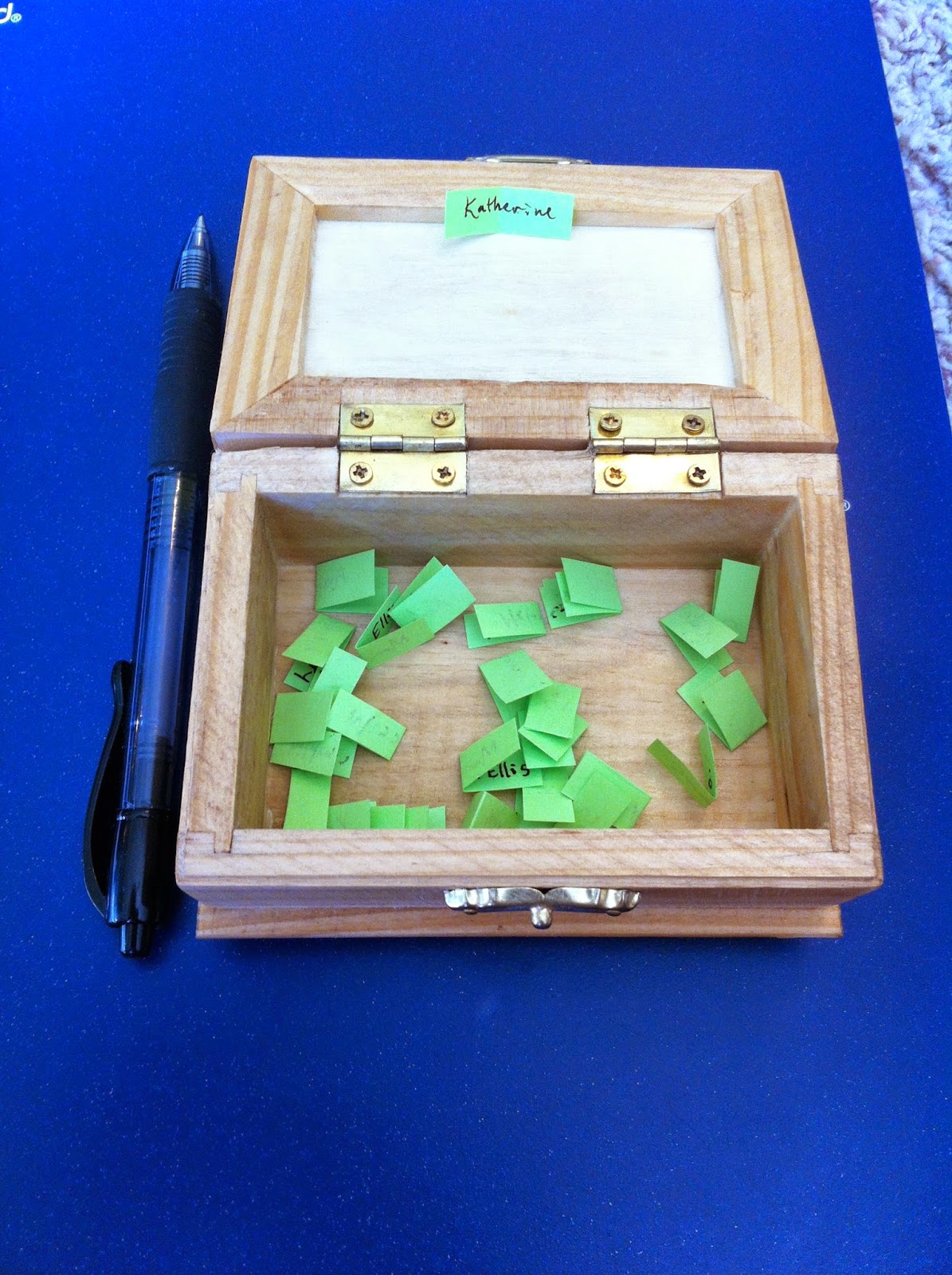 Katherine wins the book (and buttons)!

Thanks so much to everyone for the happy wishes and entries! Mariah and Katherine, please email me at myrnabobfoster at yahoo dot com. Krista, I'll be over your way next week for a high school soccer game. Hopefully, we can swap illustrated brain children then. :o) If not, I'll mail it to you.

Third, on a completely unrelated note, I finished my first draft of the first book in a middle grade space opera series. I wrote this draft in the notebook underneath the chest in the picture. There's nothing quite like finishing a first draft. It still needs lots of work, but I totally love it (which means I'd probably better work on a different project before I revise it).

I wrote my first blog post on October 10, 2009. That little post had two commenters: Stephanie Perkins and the mysterious Q. I thought it was fun that some of our avatar photos in the comments are actually the ones we used back then.

Steph was one of the reasons I started blogging. I interacted with Steph through her blog for quite while before started my own. I still love Steph and her writing, so I'm giving away a signed copy of her latest novel, ISLA AND THE HAPPILY EVER AFTER, (and the three buttons in the pic) as part of my anniversary celebration. Steph's lyrical writing, the intense longing, awkward situations, hard decisions, and authentic voices make for an amazing read. Plan on not being able to put it down once you start. 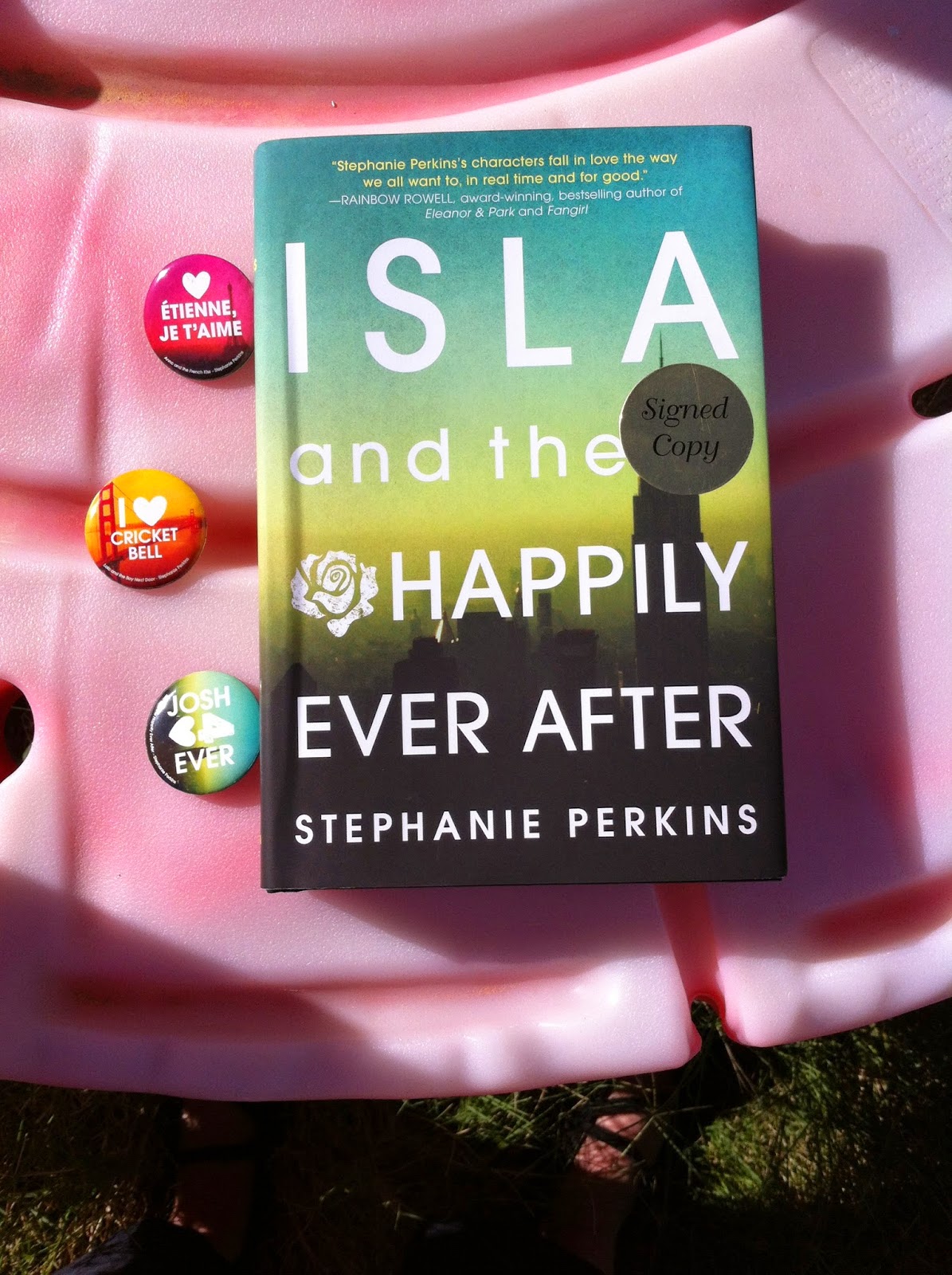 Isla was so easy for me to relate to. I read blogs for a long time before starting my own because, as Isla states, "social networking has always felt like a popularity contest to me. A public record of my own inadequacies."

But after I jumped into it, I made the most amazing friends. All of my regular critique partners are people I encountered through blogging. I've met up with Krista, Jackee, and Q, but Amy and Adam live farther away. Adam lives much, MUCH farther away (Thailand). If the only benefit I ever received from blogging was the influence these five people have had on my life and writing, it would be worth it.

I could tell great stories about any of my CPs, but I'm going to single out Q for a moment because, like Steph, she commented on that first blog post. This time of year, last year, we (along with another friend) were engaged in a writing challenge where we reported to each other on a daily basis. It was awesome. We both finished first drafts. In March, we attended a writing workshop that Mette Ivie Harrison hosted at Sundance as part of Writing for Charity. The workshop included a critique and private conversation with Joe Monti, Executive Editor of Saga Press. That was kind of incredible. Joe Monti's questions and comments were intelligent and insightful, and I believe that anyone would be fortunate to have him for an editor. However, the best part of the experience was hanging out with Q, talking about writing and books all day. Discussing ideas in person is a completely different experience than a novel critique.

Although I often critique writing for others, I don't usually give away critiques on the blog. In fact, it's probably been three or four years since the last time. But if you've written something (poetry, PB, MG, or YA) for children or teens that you'd like me to critique, put a brief description in the comments. I'll pick the description that most appeals to me. I've written everything listed in parenthesis. I've sold several poems to Highlights High Five and lots of newspaper articles (mostly on assignment).

In fact, I have a poem coming out their November issue. If you'd like a copy (it's a preschool magazine), put that in your comment.

I'll choose winners of the Highlights High Five magazine and ISLA AND THE HAPPILY EVER AFTER randomly. You may enter all three giveaways if you'd like. Because of the nature of this post, I'll give a bonus entry to anyone who comments about how they found my blog. Comments must be posted before midnight (PDT) on October 20th. Also, I'm sorry, but this one isn't open internationally.

Thanks for reading!
Posted by Myrna Foster at 12:15 PM 20 comments: