Dear Editor is giving away a free picture book edit. If you're interested, click here for her giveaway post. You have until October 10th. And if you write for children, I recommend subscribing to her feed. She isn't requiring it to enter her contest, but she answers questions, both through her posts and in e-mails. Dear Editor is one of my three favorite writing industry blogs.


Also, I saw this over at Shannon O'Donnell's blog and had to share it - so funny. 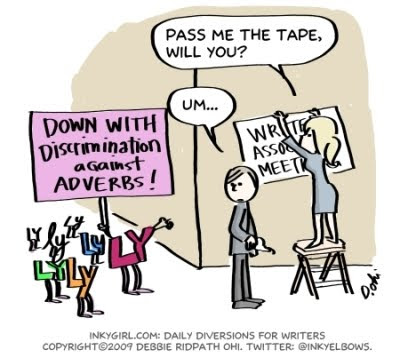 I wasn't at all excited to get out of bed this morning. Tuesday is one of my crazy days, and I knew it was going to be even crazier than usual because I had to drop off the van to get it fixed and find a ride to work. This song is silly, but it describes how I was feeling.


But then today ended up being a great day, so I thought I'd share some of the little things that made me happy.

1.   One of the girls in my afternoon pre-school class brought me a flower today.

2.   Another of the girls had a purple extension braided into her hair.

3.   A very shy boy in the morning class and a very shy girl in the afternoon class insisted on hugs today. The girl is almost deaf without her hearing aid. The boy cried when his mother dropped him off. You get the idea.

4.   Tonight, not only did my very underdog middle school soccer team win their first game, 5-4, each of the five goals was scored by a different player. This is the sweetest, most respectful team I have ever coached. When I came home from the first practice and told Ben how nice they were, he said, "Nice kids don't win soccer games." And I worried. And then I saw the older kids on the other teams and worried more (watching kids you care about lose = not fun). But they've learned quickly, and they play their little hearts out, and I am super happy for them tonight.

What made you happy today?
Posted by Myrna Foster at 10:16 PM 11 comments:

Some of My Favorite Banned Books

So, Banned Books Week started today, and today, reading this article, I found out I read a banned book to both of my pre-school classes on Tuesday. And because the wee kiddos loved it so much, I read it twice in both of those classes (yes, they begged), and most of them chanted along with me the second time.

What was the book?

Yes, the Texas Board of Education banned BROWN BEAR, BROWN BEAR, WHAT DO YOU SEE, by Bill Martin, illustrated by Eric Carle, in January of this year because they thought the author was someone objectionable, someone else. In other words, they banned a fantastic book because of a mistake.

This reminded me of something that happened closer to home. A few years back, I went to a Scholastic Warehouse Event with several friends, and they were selling paperback copies of SURVIVING THE APPLEWHITES, by Stephanie S. Tolan. Ben and I loved the book, so I recommended it. One of my friends said it was a bad book, that a group of parents had made one of the 5th grade teachers remove it from her curriculum the year before. I asked my friend if she'd read it. Of course she hadn't and could only remember that the book had a bad kid in it. From what I gathered, only one parent had read SURVIVING THE APPLEWHITES and decided it wasn't appropriate for her child, and I thought how sad it was that no one had challenged her. I have to wonder if the lady even finished reading the book.

I highly recommend it.

So many banned books are such well-written, life-changing, beautiful works of art that it makes me wonder if the people who ban them are afraid to feel. There's a controversy over SPEAK, by Laurie Halse Anderson, at the moment. I haven't read SPEAK, but it can't be a great idea, limiting access to a book that helps victims find their voice. Some of my favorite banned books are FARENHEIT 451, anything by ROALD DAHL, and the HARRY POTTER series, but it's hard to choose.

Do you have a favorite banned book?
Posted by Myrna Foster at 11:59 PM 18 comments:

Okay, I might be slightly prejudiced. I've been friends with the two funnies who made it for almost 20 years, but seriously, it's great.


Don't you think so?

Have a great weekend!
Posted by Myrna Foster at 2:22 PM 7 comments:

The First 250 Words of Star Swans and Sarki

So, I entered the first sentence of STAR SWANS AND SARKI in a contest a little while back, not really thinking much of it. I entered because the agent giving out page critiques for prizes, Natalie Fischer, is on that list of lovely people I intend to query when I feel my manuscript is ready. However, my first sentence isn't totally amazing. I feel like it's a great opening for my story, but that's something a reader would realize later on (kind of like the cover art for WHEN YOU REACH ME, only not so much).

In fact, I've been in a bit of a funk over the story since I realized I cut too much information from the beginning a couple of weeks ago. I don't want to put the parts I cut back in, so now I'm coming up with ways to show the information (which is going to take my word count back up). I've decided I need a ghost scene near the beginning. *grins* I love what I've been playing with because it involves one of my favorite characters. The character doesn't have a big role in the story because he stays behind to take care of their home, but he's important to the main character. This scene would show how they interact and keep my readers from being confused about the ghosts. I hope.

I'm feeling better about the story again (now that I have a solution), and my first sentence is a finalist over on Elle's blog. You can click here to read my first 250 words in her comments section, if you're interested. And you can laugh at the fact that it took me three times to post my entry without errors. ;)

Also, if you have a book on pacing you'd like to recommend, I'd be grateful. It's something I'd like to focus on this revision. Thanks!
Posted by Myrna Foster at 10:57 PM 12 comments:

And Our Mockingjay Winner is …

Thanks to everyone who entered!
Posted by Myrna Foster at 5:48 PM 12 comments:

If you'd like to get your hands on MOCKINGJAY, but for some reason or other haven't yet, this post is for you. I have a copy I'd like to give away.

To enter, leave a comment before midnight PDT on Wednesday. This contest is open internationally, and I will give two extra entries for each link you leave in the comments that you blogged, tweeted or posted this on FB.
Have a great weekend!
Posted by Myrna Foster at 8:22 PM 20 comments:

I took two flower mantids away from Daxton's kitten tonight, the second about five minutes after the first. I don't know how or why they came in the house, but they've been hunting bugs outside our front door every night for at least a week. I didn't see any damage when I looked them over (not an easy task).

The first time I notice one (about a week ago), I thought a praying mantid was eating a butterfly and wondered what kind of butterfly it was. I'd never seen a butterfly with such beautiful pink and green markings. So, I broke off a bit of grass and moved the mantid with it to get a better look. It flew onto my pants, and I realized why I'd never seen a butterfly with those markings. Ben very cooly informed me there were two of them and went back to reading MOCKINGJAY.

Now I'm wondering why I've never seen a flower mantid. I'm not even sure they're native to our area, but that's what they are. After I showed the strange looking mantid to the kiddos, Daxton ran to look it up in his favorite book, SMITHSONIAN INSTITUTION: ANIMAL.

It's a rare day that goes by without his opening this book. He found flower mantids listed above common praying mantids on page 555, and after reading descriptions for both, we had a name for our mantids. If I manage to get a picture of their wings spread, I'll post it. They have ruby red eyes, a golden crown up around their antennae, and their spikes and mandibles are bronze. I've never seen such metallic looking mantids. And then they have fairy princess wings. I couldn't let the cat eat them.

I searched the internet for almost an hour, looking for a picture or video of mantids that looked like ours, but so far I haven't found one. This video shows a different type of flower mantid, if you're interested.


Have you ever seen a flower mantid?
Posted by Myrna Foster at 12:22 AM 11 comments:

There's been a lot of buzz lately about MOCKINGJAY, and rightly so, but I'd like to recommend another dystopian that I enjoyed more. Last month, I won a copy of INSIDE OUT on Kelly Bryson's blog. She interviewed the author, Maria V. Snyder, and Ms. Snyder offered to give one of the people who commented on her blog a copy. I didn't have to agree to review it, and I hadn't read any of her other books, but I loved the story.

Packed with action and intrigue, INSIDE OUT kept me turning pages and hoping the characters weren't a chapter away from meeting Chomper (a messy end). Trella accidently incites rebellion and hope in both likely and unlikely places by searching for Gateway (a way out of the society they're trapped in). She's good at keeping her head down and staying out of trouble, but when her best friend turns himself in to save her from suspicion, Trella knows she won't be able to save him or find Gateway (which is what he wants her to do) by staying out of trouble.


I'd love to know what you thought of INSIDE OUT, if you've read it. If not, let me know when you have. ;)


If you're interested, Maria V. Snyder is giving away another one of her books, SPY GLASS, as part of the Squeaky Books Birthday Bash. The interview before the giveaway is a lot of fun too. This is only one of many giveaways, and I have a button in my sidebar that will take you over there, or you can click on the link in my last sentence.

And it's about time. My fourth draft took a lot longer (3 1/2 months) than my third draft (3 weeks), but I made a lot of changes (although the read aloud I intended to finish with turned into a silent speed-read). STAR SWANS AND SARKI went from somewhere around 96,000 words to 89,490 words.

This is the first draft that I've finished with fewer words than I started it with. I'm shedding information that I needed to know to write the story, but has become obvious or otherwise unnecessary. And I'm finding that as I take out the clutter, my story becomes more and more like the original version - the one I fell in love with and tried to capture with my first (messy) draft. I'm not sure why I'm taking such a roundabout way to get there . . . actually, I do. I had to get to know my characters and their backgrounds. Have you ever experienced something similar?
Posted by Myrna Foster at 10:28 PM 27 comments: