Revision: Going from Blah to Hilarious

I'm just going to let you watch the video. This episode of Studio C shows how throwing something unexpected into a story line makes it funny. And let's be honest, we all like funny.

The Next Big Thing

Two of my critique partners (Adam Heine and Krista Van Dolzer) tagged me last fall for The Next Big Thing. It's taken me a while to put it together, but here it is! :o)

Ten Interview Questions for the Next Big Thing:  (Has anyone else noticed there are eleven?)

What is your working title of your book?   The Binder's Web

Where did the idea come from for the book?    A dream

What genre does your book fall under?     YA fantasy

Which actors would you choose to play your characters in a movie rendition? I'm not a movie buff, and I wouldn't actually want to cast my characters. I'd want someone who knew what they were doing to cast them. That said, I put a lot of thought (more than I should have) into choosing the following actors. I didn't just choose them because they looked like a certain character, though that certainly played a part. I've never done this before, and I don't know if I'll do it again, but this exercise did help me see which characteristics were essential.

What is the one-sentence synopsis of your book? Caryn, Princess of Glenwys, needs to enlist the sea serpents and unite the four kingdoms of Serpent Isle against the coming invasion fleet, but her plans go awry when the serpents refuse her and a family ghost reveals its alliance with the enemy.

Will your book be self-published or represented by an agency?  I will query agents with it.

How long did it take you to write the first draft of your manuscript?  About six months

What other books would you compare this story to within your genre? Tamora Pierce's TRICKSTER'S CHOICE, Sarah J. Maas's THRONE OF GLASS, Robin McKinley's Damar books, and Shannon Hale's ENNA BURNING

Who or what inspired you to write this book? It started out as a story inside Star Swans, but it kept growing. The story inspired itself. It came as a dream, and once I started writing it out, it wouldn't settle for being a little piece of a larger story.

What else about your book might pique the reader's interest? Hmm. The Drowned Caverns look like the islets in the top picture of Wikipedia's Phang Nga Bay entry. However, the isle itself started out as an old map of Wales that I amputated from Great Britain. It's changed since then, but I kept some names.

Now for the fun part: You're it!

Kristin Gray
Amy Sonnichsen
Jackee Alston
And seriously, if you're reading this and would like to participate, consider yourself tagged. Please leave a link to your answers in my comment section! I want to read them. :o)

*Use this format for your post
*Answer the ten questions about your current WIP (work in progress)
*Tag five other writers/bloggers and add their links so we can hop over and meet them.

Ten Interview Questions for the Next Big Thing:

What is your working title of your book?
Where did the idea come from for the book?
What genre does your book fall under?
Which actors would you choose to play your characters in a movie rendition?
What is the one-sentence synopsis of your book?
Will your book be self-published or represented by an agency?
How long did it take you to write the first draft of your manuscript? May we see an intro?
What other books would you compare this story to within your genre?
Who or what inspired you to write this book?
What else about your book might pique the reader's interest?

Include the link of who tagged you and this explanation for the people you have tagged. Be sure to line up your five people in advance.

A Little Success, A Little Failure

So on Friday, when I went to the post office to get my mail, I had something exciting in my box. 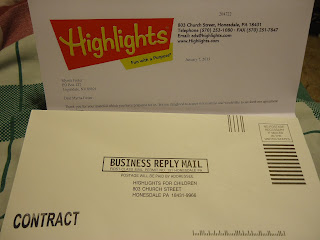 Yes, that would be my sixth contract with Highlights for Children. :o) Yes, I am totally smiling right now. I actually wrote "Apples" a couple of years ago, but at that point it didn't feel finished. I set it aside. I set a lot of things aside, some big, some small, hoping that at some point I'll figure out how to revise them. I'd picked it up several times since then, but it wasn't until this past November that something clicked. I submitted it and waited.

During the time that I waited, I revised TBW two more times and sent it out to a couple of my critique partners. In my last draft, I moved the beginning (again) and used flashbacks to convey backstory. I cut a lot of old stuff, added a lot of new stuff, and moved large chunks around. I went over and over it to make sure the pieces fit, but it ended up not working for either of my readers. And going back over the beginning with their notes, I agree with them. I need to put the story back in chronological order, but there are quite a few changes that I want to keep from the same draft. Huge changes. Sorting out the first half of the manuscript won't be easy, but hopefully my next draft will be a thing of beauty and coherence. ;o)

Little successes. Little failures. They're all learning experiences, and I'm thankful for the feedback my editors and critique partners give me. They (and experience) are my teachers.

Thank YOU for reading my blog, for your encouragement and discussion. It helps. :o)

William Alexander's GOBLIN SECRETS wasn't what I was expecting. When I read in the description that goblins were the only ones allowed to perform in plays, my brain conjured an oppressive society where humans were subservient to goblins, and while that would have been interesting, it would have made the goblin characters in this story quite impossible. I don't want to say why. Rownie doesn't know what to think of the goblins, so it's probably best if readers go in not knowing what to expect.

In GOBLIN SECRETS, the citizens are forbidden to wear masks or even pretend to be anyone else. The penalty for acting in a play is the removal of the offender's heart, which turns him into a kind of zombie slave. This isn't a zombie story though. It's a story about identity, about a boy looking for his older brother and falling in with the same group that taught his brother to wear masks, about the dangers of not forgiving. It's about heartlessness. It's about the magic of choosing to become someone you weren't before. The story and writing are beautiful. I love the little details, like the older brother teaching Rownie to throw pebbles into the river where their mother's barge went under. "We drop the stones to say hello. It's like leaving a small pile of stones on a grave. The dead speak in stones. Pebbles are the proper way to tell them hello."

And when Rownie finds his brother . . . oh, I cried (Les Mis ugly cried). I don't think that's even a spoiler. You know Rownie will find him; he has to; you just don't know how.

Trust me: you want to read this book.

If you're interested in more Marvelous Middle Grade recommendations, Shannon Messenger has the links!

What are you loving right now?

I love beginnings, whether it's the beginning of a year, a month, a week, or a day. In the beginning, anything is possible. Beginnings are messy. When I ran track in high school, my coach usually had me run the first leg of our relays, and pulling out in front from the get-go was exhilarating.

Endings have their own charm, the charm of pulling things together and tidying up. They're easier for me to write. Sometimes I catch myself dragging them out (in story and real life) because I'm not ready for closure, and sometimes I can't wait to cross the finish line.