THE STRANGE CASE OF ORIGAMI YODA, by Tom Angleberger made me laugh a lot, especially Kellen's (one of the characters) doodles.

This middle-grade novel is a collection of chronological stories told by different students about what happened when they took the advice of Dwight's Origami Yoda. The main character, Tommy, collects the stories to determine whether he should take Origami Yoda's advice about a certain girl.

The middle school dances and insecurities brought back memories of my most embarrassing middle school mishaps, and there are even instructions for making your own Origami Yoda. I especially loved the ending. This is a great one for reluctant readers, especially boys, but I'd recommend it to anyone above about second grade. You can read its write-up for the Cybils Award here.

And if you'd like to read more Marvelous Middle Grade Monday posts, Shannon Whitney Messenger (our founding mother) has the links and a book giveaway.
Posted by Myrna Foster at 5:00 AM 15 comments:

Have you seen the cover for Kiersten White's SUPERNATURALLY? 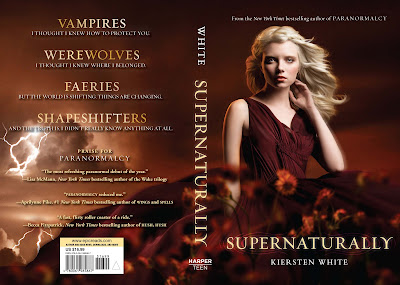 I like it even better than the cover for PARANORMALCY.

I've been suffering from an unusual amount of anxiety lately, so much so that it's kept me awake at night. I thought I knew the causes. There were plenty of external influences to choose from, and I alternately blamed them as I struggled to sleep. Monday night, I slept for less than an hour. I kept getting up and doing things, reasoning that if I had one less task to worry about I'd be able to sleep easier. Writing crossed my mind, but it wasn't something that had to be done immediately, and I thought I was too tired to write coherently.
Last night, when I couldn't sleep, I sat down and wrote. I'd left my character in a stressful situation on Saturday, and I wrote all the way through it's climax. As soon as my character neutralized the antagonist, the tension left my body. I slept better than I have in a long time.
It made me wonder how well Suzanne Collins slept while writing THE HUNGER GAMES trilogy.
Do you empathize with your characters?
Posted by Myrna Foster at 1:22 PM 13 comments:

I've had a couple of people who've told me they have ideas for stories, but they aren't sure how to write them. There are a lot of different ways to write a first draft. The most important thing is to sit down and write. Whether you're writing in a notebook or on a computer, set aside chunks of time, be consistent, and write whatever comes to you.

Not For Robots, by Laini Taylor, is a collection of essays on writing. If you're at all interested in writing, I highly recommend clicking the link and reading what she has there.

Some people write outlines first. I've tried that. Following an outline doesn't work for me, but it might work for you. I like to have an outline in my head. In other words, I have an idea of where the story is going before I start, but I haven't planned out everything. If I get a better idea, I use the delete button. Yes, I do edit while I'm writing my first draft. Some writers don't.

Even when I think I know how a scene is going to go, it changes as I write it. Last night, I finished a scene where I'd planned on having X take presents to Z. I wanted to have Y go along as well, but then realized he couldn't because of an injury. Oy! So, as I'm writing, Z shows up at X's door. X and Z have an interesting conversation (in terms of plot and characterization), during which Y and Z fail to recognize each other. There were a lot of other things that clicked into place that wouldn't make sense out of context, but the scene that I wrote was so much better than the one I'd planned.

Usually I can't see more than a paragraph or two ahead of where I am in the story, but as long as I keep writing, the story keeps coming. And it's exciting to see how the story unfolds.

I average about 500 words an hour, if I'm focused on what I'm doing. That's an hour of actual writing. Checking my e-mail or googling who knows what doesn't figure into that. So, if I plan on writing a 60,000 word first draft (not that I write to fill in a word count), it's going to take me at least 120 hours. I reward myself for every thousand words by writing it on a calendar. That may seem silly, but it makes me happy, and it lets my family see where I am (or warns them that I'm functioning on less sleep than I should be).

If I get stuck, I analyze why I'm stuck. If it's because I don't know my characters well enough, I free-write about a particular character until I understand what motivates them. If I'm not sure what to do next, I'll skip to a scene that comes later and write from there. I don't stop and let myself have "writer's block." If I get out of the habit of writing, I start to dread it, and it becomes a bigger deal than it should be to get started again.

Writing is work, but I think it is worth it. I love when the pieces come together and form a picture that suddenly feels 3-D, and I love when the words sound perfect. I like falling in love with my characters and rooting for them. In a lot of ways, it's like reading, only harder and more fulfilling. You'll have to decide what works for you and whether or not it's worth it.

If you've written or are writing a first draft, I'd love to hear what works for you.

This is making us giggle at our house.


What's making you smile at yours?
Posted by Myrna Foster at 12:13 PM 9 comments:

Ah, I'm embarrassed, actually, to admit it's taken me this long to read PARANORMALCY, by Kiersten White. After all, I did interview her last summer and give away a pre-order of her book. I've been reading Kiersten's blog since before she sold the manuscript, and I knew I liked her writing. Her posts always either make me laugh or think, sometimes both. I'm not a fan of paranormal romance though. I knew I'd read PARANORMALCY anyway, and I hoped it would be as funny and, well, as real as its creator.

I loved it. My daughter loved it. My husband loved it. Currently, my nieces and nephews are fighting over it, and they've had it for over a week. My twelve-year-old quotes it.

Why did we love it?

I was trying to explain this to my nineteen-year-old nephew, without spoilers, as the cover is very . . . pink.

Me: PARANORMALCY is hilarious, but it's smart funny.

Me: Kind of. Just read the first couple of pages and see if you like it.

And then we both gushed about how much we love Terry Pratchett and why, but that should probably go in another post ;) And I think PARANORMALCY is more intense than most of Pratchett's stuff, but I thought the witty humor comparison a good one and left it at that.

The story is about a girl who can see through paranormal glamours. The agency she works for tags paranormals and gives them jobs, keeps them from eating people - stuff like that. It gets interesting when a shape-shifter breaks into the place where Evie works about the same time that something starts killing paranormals. The bleeping mermaid will make you laugh, and the faeries in this book will give you chills.

Have you read PARANORMALCY? What did you think?