Earlier tonight, Robyn was asking me about a fairy tale that has several major variations. The funny thing is that both of us originally read the same variation, and it isn't the popular one that I've read several times in novel form. I don't own the collection it came from, either. As we were discussing the different variations, I remembered that when I was in college I had a great idea for a sequel to the fairy tale that came from reading a nursery rhyme.

Back then, I had a writing notebook where I played around with ideas, but I have no idea where that notebook is now. I've had and still have quite a few of those notebooks. I'm sure I still have it. Somewhere. But if I spent the amount of time writing that I could spend searching, I'd probably come up with something better than my original notes.

But *sigh* I am still revising TBW.

I need a pensieve. That way, I could just pull shiny new ideas out of my head and store them in it until I'm ready to spin them out.

Or maybe I need to organize my writing notebooks. *gasp* If I put dates or titles on my covers (the ones that still have covers), I might actually be able to find stuff. How do you keep track of your story ideas? Don't tell me you have a pensieve; it'll just make me insanely jealous. ;o)

I won't be around until Saturday. Robyn and I are going camping in the morning with a large group, mostly teenaged girls, and we're not allowed to take electronics. No phones. No computers.

But please, bring on the organizational tips. :o)
Posted by Myrna Foster at 12:04 AM 18 comments:

KEEPER OF THE LOST CITIES Winner

Congratulations to Britney Wyatt and thanks to all who entered!

So, this is unrelated, but UPS left something fun on my doorstep last week. 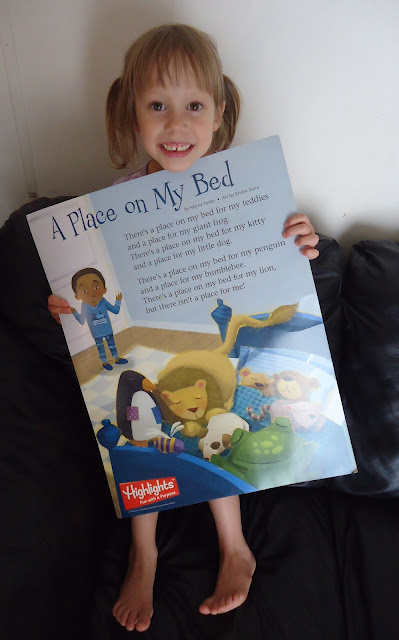 Highlights turned one of my poems into a poster! A PLACE ON MY BED is one of six poems they've turned into posters (the others aren't mine) for teachers to use in their classrooms. They published this poem in Highlights High Five two years ago. I'd love to get my hands on the whole set.
Posted by Myrna Foster at 9:36 AM 15 comments: