I just finished an incredible story, a book I hadn't heard of that I picked up because our librarians displayed it in the children's section. Today's Marvelous MG Monday is all about THE CLOCKWORK THREE, by Matthew J. Kirby. 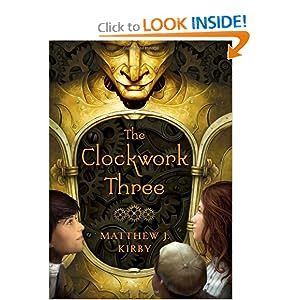 Isn't that a GREAT cover?

Three ordinary children are brought together by extraordinary events. . .

Giuseppe is an orphaned street musician from Italy, who was sold by his uncle to work as a slave for an evil padrone in the U.S. But when a mysterious green violin enters his life he begins to imagine a life of freedom.

Hannah is a soft-hearted, strong-willed girl from the tenements, who supports her family as a hotel maid when tragedy strikes and her father can no longer work. She learns about a hidden treasure, which she knows will save her family -- if she can find it.

And Frederick, the talented and intense clockmaker's apprentice, seeks to learn the truth about his mother while trying to forget the nightmares of the orphanage where she left him. He is determined to build an automaton and enter the clockmakers' guild -- if only he can create a working head.

Together, the three discover they have phenomenal power when they team up as friends, and that they can overcome even the darkest of fears.

The first point-of-view shift annoyed me because I wanted to read more about Guiseppe, but then I became just as attached to Hannah and Frederick. The historical fiction element (the little street musicians, kidnapped or sold as slaves and forced to work for their masters) reminded me of OLIVER TWIST, while the fantasy and danger reminded my husband of THE SPIDERWICK CHRONICLES. And while I can see his point, the magic didn't have anything to do with faeries. Mostly, it's more mechanical or functional. We both loved it. The prose is even more beautiful and functional than the magic.

Have any of you read THE CLOCKWORK THREE? If so, what do you think? It's only been out since October, but I'm still surprised I haven't seen reviews for it.

Shannon Whitney Messenger is also hosting a MMGM and a book giveaway today, if you'd like to hop over there.
Posted by Myrna Foster at 2:54 AM